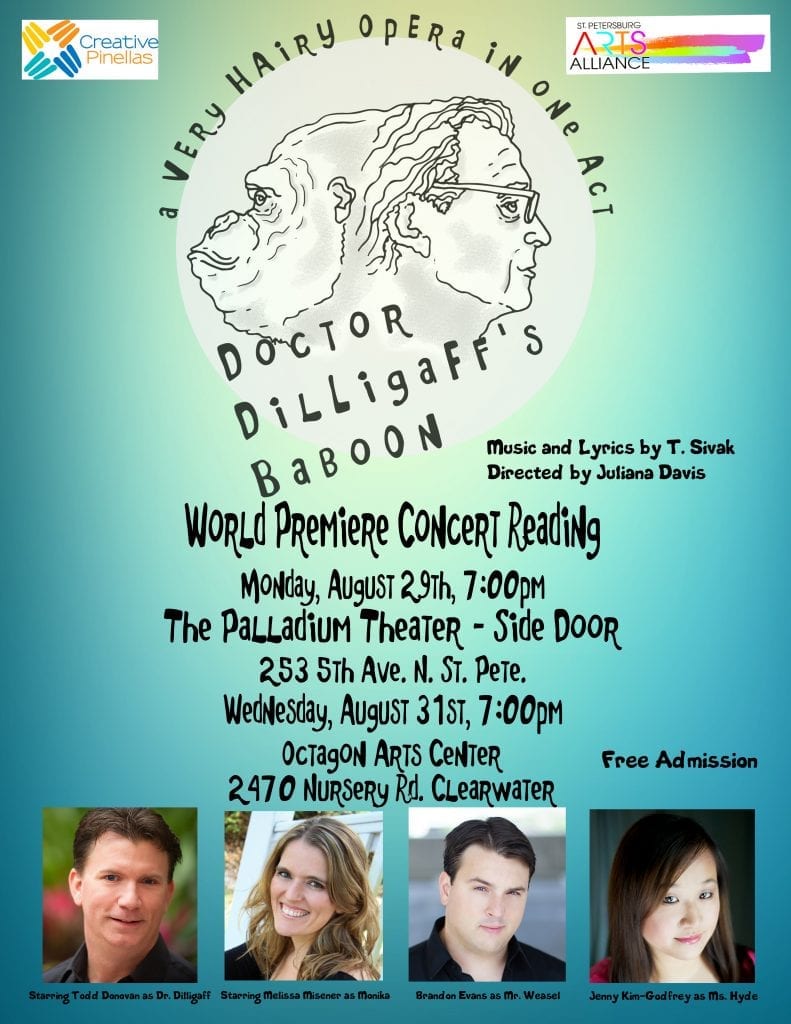 Doctor Dilligaff’s Baboon is a non-traditional comic chamber opera, 45 minutes in length, with a cast of four. It was performed in 2017 as a concert reading at The Palladium in St Petersburg, Florida and also at The Octagon in Clearwater, Florida.

It is the tale of psychiatrist, Doctor Dag Dilligaff, who keeps a huge and hideous sculpture of a baboon in his office. He affectionately calls it Monkey and confides in it when he is alone. (“Monkey”) All his patients question why such a hideous thing is in a psychiatrist’s office, a place that should be a refuge and a place of comfort. After 3 consecutive patients all ask him why he has this statue of a baboon in his office, Doctor Dilligaff comes to the conclusion that these patients must be obsessed with Apes. In fact, he surmises that Ape Obsession may be more prevalent among general society than previously thought, and he names this newly discovered affliction, Primate Obsessive Pseudo-Psychological Syndrome (“P.O.P.P.S.”) and plans to publish a paper on it. It is said that when you’re a hammer, everything looks like a nail, and for Doctor Dilligaff, it now seems that all his patients have P.O.P.P.S.

Mr. Weasel does not take kindly to this diagnosis. His wife has left him and he is depressed and Doctor Dilligaff has told him it’s because he is obsessed with apes. He leaves in a huff.

Meanwhile, Monika, Doctor Dilligaff’s Receptionist, who silently loves him, has started to grow fur and a tail. The more monkey-like she looks, the more Doctor Dilligaff begins to notice her. Finally, the steamy undercurrent that was hidden comes to bloom and they sing of their love and attraction for one another.

Just then, Mr. Weasel bursts into the inner office brandishing a banana. He informs Doctor Dilligaff that if anyone is obsessed with apes, it is the Doctor himself! And to prove it, he offers an ultimatum: he will either shoot Monika or Monkey with the banana. Doctor Dilligaff refuses to choose between them and maintains that he must be true to who he is, consequences be damned.

As he sings the final notes of his aria, the lights fade to black and 2 gunshots are heard.

Who has been shot? Monika AND Monkey? Or Monika and Doctor Dilligaff? Or…?

When the lights come back up, Doctor Dilligaff enters with a blood stain on his shirt. He sings, “The question that you have to ask yourself is ‘Who do you think you are?'” Then Monika enters, also with blood stain on blouse, singing the same phrase/lyric. Then Mr. Weasel enters with identical bloodstain, singing the same phrase, followed by Miss Yusko, a patient with P.O.P.P.S. with bloodstain, too. Together they sing, “The answer is, “I AM!” An anthem of the affirmation of being true to yourself, the show ends just like each patient’s session with Doctor Dilligaff during the show: with the timer going off, and the full cast singing what Doctor Dilligaff usually sings by himself:

“Well our time is up for today.

And I wish that you could stay,

But it’s over, it’s through,

I bid you a fond adieu

For our time is up today.”